My doctors had been saying, “she’s going to be a big baby” for awhile. I guess my body knew best, because 2 weeks and 3 days before my original due date (Feb 5th) my water broke.

“I hope my water doesn’t break in public”

“I hope my water doesn’t break in public”, I remember saying to my friends. I would then google and see that more often than not women’s water doesn’t break until they’re already in labor. It’s an 8-10% chance it breaks beforehand… making the chances of it happening in public very low!

Well, at approximately 12:55pm on Saturday January 19th, after eating breakfast at Marina Deli with Coulter and his sister, I stood up and thought I peed a little. I rushed to the nearest bathroom and realized, “this seems different.”

I walked out to Coulter and said, “Can you pick up the pig so we can walk to the car faster? I think my water might have broke…” His sister started to cry, he kissed me and we started to almost cry, and he picked the pig up as I uncomfortably rushed to the car, raced home to drop off the animals, and headed off to triage to see what was going on!

WALKING MILES DID ABSOLUTELY NOTHING

Triage said I was in labor, but it was just the very beginning so they sent me back home until I was further along. Fast forward to being back home for hours and being antsy with excitement. We walked, and counted contractions, and walked some more. At 11pm, the contractions were close enough together and we headed back in, but I kept having peaks for a while, then it would die off. Not active labor.

It was the night of the eclipse that only happens every 18 years, and apparently a lot of babies decided they wanted to be born that morning. We stayed in triage all night and didn’t get moved into a room until 7am. Triage beds are not all that comfy, and poor 6’5” Coulter slept on the floor using his sweatshirt as a pillow (for part of the night until I realized that’s what he was using and asked for a pillow for him haha).

The other thing I hoped wouldn’t have to happen during labor was Pitocin. I read it makes contractions more intense and frequent, and basically to avoid it if possible.

Side note: when your water breaks they like you to go into labor within 24 hours to avoid chances of infection.

So, at 7am what happened? Yup. Pitocin.

And we were off and running, from 8-10ish I felt contractions. Decided, these aren’t for me. And asked, “so when can I get an epidural?” Pitocin contractions are horrible, plus it gave me the shakes so between contractions my whole body would shiver violently.  It was exhausting.

10am – epidural
I was terrified of getting one. I saw my sister, Savannah, get hers when I was in the delivery room while she was having Everleigh. It’s a huge needle and it’s very very scary looking!

Honestly, it wasn’t anywhere near as bad as I thought it would be. The numbing is the part that hurts, not the mega-massive needle. Go figure. But my anesthesiologist was incredible and after injecting the numbing cream said, “welp, that will be the worst part of your entire day”.  Haha… he was honestly right.

I went from my insides being squeezed to death with every contraction (and the shakes!) to that feeling you get when your arm goes dead, from my waist down. 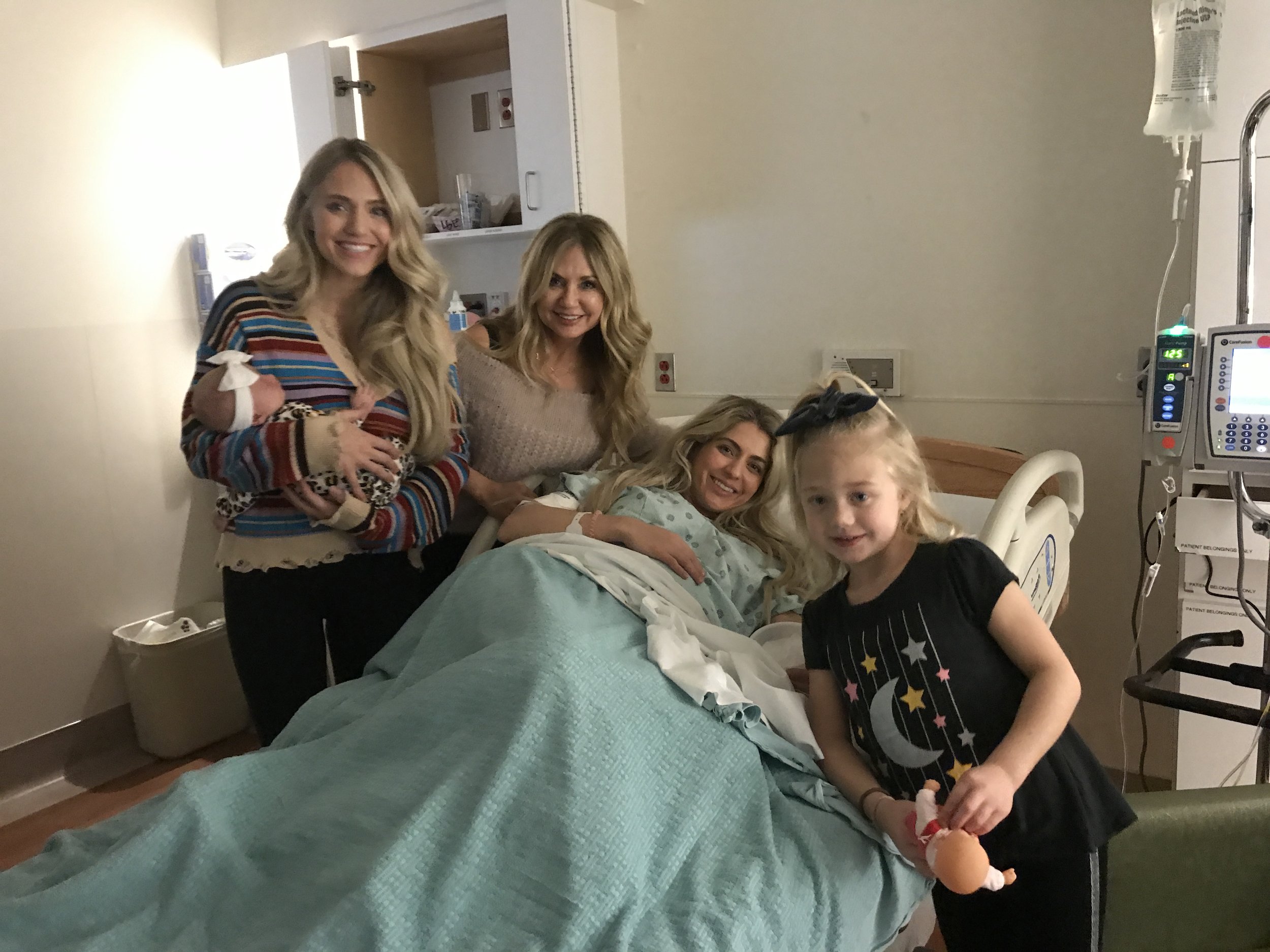 I LITERALLY CAN’T MOVE MY LEGS

We said hi to Coulter’s mom and sister & then my mom and sister arrived at the hospital and they came in, then we took a nap. All four of them came back in and I remember Coulter sitting and rubbing my feet as we all chatted. He sat my foot down at the edge of the bed and it just completely slid off the bed! “Babe, I literally cannot move my legs at all” I said cracking up, as he quickly heaved my dead leg back onto the bed.

At around 3:45pm we realized I was at over 9cm dilated. We kicked everyone out and my amazing nurse started talking me through what would happen next.

From 4-4:30 I started to push and then the nurses had to switch shifts. I was frustrated because I was in love with our nurse. Also, I was getting in the zone and had to sort of break while they switched and got the new nurse up-to-date.

Then it was back on! Baby girl had a few times where her heart rate would drop and we’d take little breaks. Coulter counted to 10 more times than I care to recall. All of my family decided it would be appropriate to stand outside the door giggling and chatting…. Coulter took a counting break and told them all to go back to the waiting room (haha)… 1, 2, 3, 4, 5, 6, 7, 8, 9, 10. Three times with every contraction. She kept coming and then sinking back down. The third time she was almost out I decided I wasn’t letting her sink back again and continued pushing after the 3rd set of counting….

I laid back, happy and exhausted, but poor Coulter saw her head with the umbilical cord wrapped around it. Twice. The doctor unwound it, all while I laid there thinking all is well and I was done. “Push” I hear from my doctor, “you have to get the shoulders out”. I just remember thinking, “but? What? Ugh… I thought I was done!” Haha.

5:24pm
The best moment happened. They laid her on my chest! It really is as magical as people say. I had had it explained to me so many times without any justice being done. So, I won’t even really try. All I will say is that I truly hope you get to experience that moment sometime in your life. It’s beautiful.

At our hospital they put the baby right on you before weighing her, washing her, or anything. It helps the baby with nursing and bonding. Nurse she did. About 20mins of snuggling later she started nursing! Then it was Coulter’s turn for skin on skin time. The nurse said, “I bet you’ve been dying to see this cute little butt!?!?” As she took Senna off my chest and turned her around so I could see that cute little tushy. Yep. It was a cute little thing! Then she passed her over to Coulter. Lying there watching them together for the first time made me cry all over again, and I just started crying again now as I typed that. I felt so insanely lucky to have such a loving sweet husband, and watching him as he became a father was the sweetest moment imaginable. I still feel so lucky, and I still adore watching him stare lovingly at her every time she’s on his chest. Thanks for talking me into having a baby the second we got married, Coulter 🙂 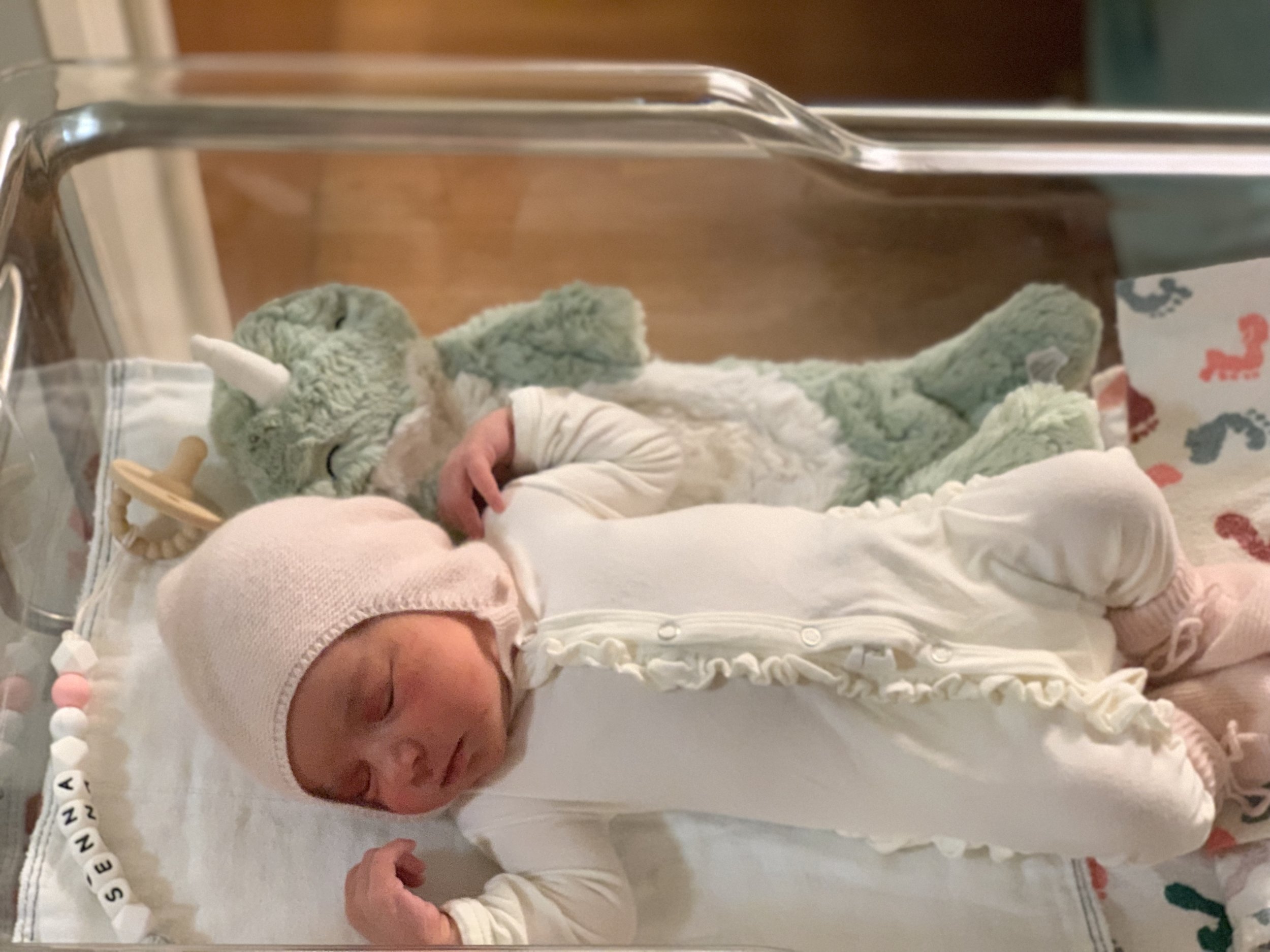 About an hour and a half after we had Senna, our family finally all came in to celebrate with us! I held little Posie, my sister’s new little girl, while Savannah, Everleigh, and my mom went to meet my little girl (who was now being measured and weighed). I am so blessed to have such an amazing family, and I can’t believe I have my own little family of 3 now as well (Well 5, can’t forget Smooch and Prosciutto)!

I absolutely loved the experience. Yes, there is pain, but there is also a reason mom’s usually do it more than once. It’s not THAT bad, and the rewards far out weigh everything else.

What to pack in you pregnancy "Go Bag"